SEAT’s fab four take honours in the What Car? Car of the Year Awards 2018

SEAT has taken the What Car? Car of the Year Awards 2018 by storm, with four different models – Arona, Ibiza, Leon and Ateca – each taking category wins. It’s a clean-sweep for the quartet of new cars that has spearheaded the Spanish manufacturer’s largest product offensive to date.

The awards were presented at a glitzy ceremony at Grosvenor House Hotel in London last night. The results mark an immediate success for the Arona, the latest addition to the fast-growing SEAT line-up. Still in its launch phase in the UK, it has claimed the ‘Best Small SUV’ title in a hotly contested category, following up a glowing five-star What Car? magazine review. It continues SEAT’s dominance of the category, with its larger brother, the Ateca, having taken the award in 2017.

The What Car? judges referenced the fact that the Arona “is more affordable than most rivals” thanks to “great finance deals” and praised the “comfortable and well-equipped interior.” The impressive range of personalisation options – including the multiple no-cost combinations of contrasting roof and bodywork colour available – were “the cherry on top”.

The New Ibiza carried off the ‘Best Small Car’ title, confirming its pre-eminence in the UK’s supermini class and, like Arona, building on a five-star assessment from What Car’s rigorous road test team. The judges declared: “The Ibiza is everything a small car should be – it’s agile, practical and offers low running costs. There are just no weaknesses in its armour.”

When it comes to a new car for the family at price less than £18,000, the SEAT Leon – also a “best buy” winner in 2017 – was named the top choice. “SEAT is on a roll at the moment,” the judges commented, “and the Leon kicked off its current revival. With a well-crafted interior and a focused driving style…it’s a great win for SEAT at this price point.”

The Ateca (another member of the exclusive What Car? five-star car club) completed the impressive SEAT showing, acclaimed as the ‘Best Family SUV’ for less than £20,000. “Staggering value for money” in the judges’ opinion, the Ateca was rewarded for its impressive equipment features right from entry-level and the “punchy” performance of its 1.0 TSI Ecomotive 115 PS engine, adding a “fun” dimension to the car’s all round excellent functionality.

Commenting on the brand’s impressive night, SEAT UK Director, Richard Harrison, said: “These awards are among the most keenly sought and highly-respected in the car industry and it is a tremendous result for us to have collected so much silverware in one evening. There is a tangible sense of momentum with SEAT currently, and the judges’ comments confirm how we’re succeeding in our mission to give our customers even more style, quality, technology, choice and performance, with value-for-money guaranteed.”

Want to drive an award winner? Get in touch with a member of our team today. 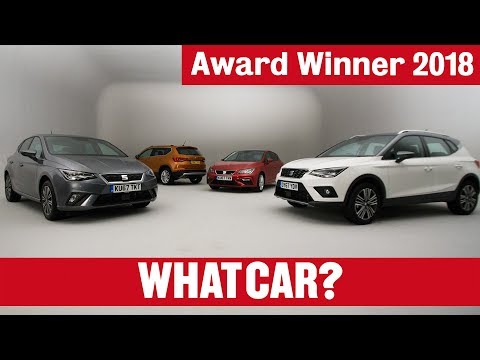 Back to Top
Back
Vehicle Valuation
Compare Saved Vehicles
Top
Close
Your Cookie Settings
Select your cookie settings
Strictly Necessary Strictly Necessary cookies are essential to let you move around the website and use its features, such as accessing secure areas, shopping baskets and online billing. These cookies allow our website to provide services at your request.
Performance Performance cookies collect information about how you use our website e.g. which pages you visit most often, and if you experience any error messages. They also allow us to update our website to improve performance and tailor it to your preferences. These cookies do not collect any information that could identify you - all the information collected is anonymous. They will not be used to target adverts to you on other websites.
Functional Functionality cookies are used to remember the choices you make, e.g. your user name, log in details and language preferences. They also remember any customisations you make to the website to give you enhanced, more personal features.
Targeting Targeting cookies collect information about your browsing habits to deliver adverts which are more relevant to you and your interests. They also measure the effectiveness of advertising campaigns.
Save Settings
Cancel Changes

Your settings will take affect when you refresh the page or move to a new page. Find out more about cookies